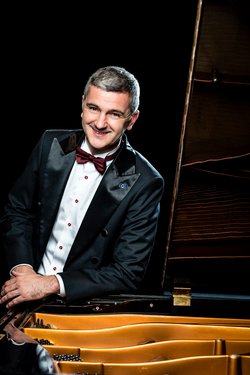 “He has all the virtuoso velocity and firepower, and then some” – BBC Music Magazine

“Daniel Grimwood, fast making a name for himself as an original and discriminating musician” – Gramophone

Daniel Grimwood is a performer of international renown, combining an exceptional talent, rare versatility and refinement, with an inquisitive personality.

With a repertoire ranging from Elizabethan Virginal music to the works of living composers, he enjoys a solo and chamber career, which has taken him across the globe, performing on the most prestigious concert platforms, including the Wigmore Hall, Queen Elizabeth Hall and the Purcell Room in London, Saffron Hall, Bridgewater Hall in Manchester, Symphony Hall Birmingham, the Sage Gateshead, the Three Choirs Festival, the Rachmaninoff and Gnessin Halls in Moscow, the Carnegie Hall in New York, as well as venues in Germany, Austria, Italy, The Netherlands, Slovenia, Estonia, Taiwan, Azerbaijan, Egypt, Lebanon and Oman.

His musical interest started as a 3-year-old playing next door’s piano, and from the age of 7 he was performing in front of audiences. His training continued with Graham Fitch at the Purcell School, where he also studied violin, viola and composition, giving him a broad appreciation of classical music, and later with Vladimir Ovchinnikov and Peter Feuchtwanger.

Although primarily a pianist, he is frequently to be found performing on harpsichord, organ, viola or composing at his desk. Grimwood is a passionate exponent of the early piano, and has given a recital of Chopin’s Etudes on the composer’s own Pleyel piano.

As a solo recording artist his growing discography ranges from Scriabin on Somm Recordings to Algernon Ashton, a world premiere recording on Toccata Classics. His discs of Liszt and Chopin, performed on an 1851 Erard piano, received a unanimous chorus of praise from the press; the Liszt album was Daily Telegraph CD of the week and Editor’s Choice in Gramophone Magazine. He was the first artist to record on the Edition Peters Sounds label, the complete Fauré Nocturnes album was released to excellent reception in The Sunday Times, which was followed by a disc of solo piano works by Adolph von Henselt, described as “a blizzard of dazzling pianism” by the Observer. His most recent release is a disc of Doreen Carwithen and William Alwyn, also on Edition Peters Sounds.

Daniel Grimwood regularly performs on live broadcasts on BBC Radio 3, and has been featured in BBC Four’s TV documentary series “Revolution and Romance”. His media work continues with performances and video masterclasses in the “Piano Masterworks” collection on Tido Music, a new iPad app launched in 2016.

The Exercises of Peter Feuchtwanger

Peter Feuchtwanger was an important teacher who created a series of exercises designed to encourage healthy, natural and relaxed movements at the piano. In this module, Graham Fitch and Daniel Grimwood give their takes on Peter's exercises and share anecdotes from their experience in working with him.... Read >>