Understanding Chords, Grand Arpeggios and How to Harmonise

This article provides a more in-depth explanation of the material in the video. However, after watching the video you might light to jump ahead to try some of the examples yourself. If so, then please click here to view the worksheets for the pieces covered in the video.

Chords are built on the notes of the scale in triads of root, third and fifth, and they are named by their root. Here is the C major chord, chord I, or the tonic, in the key of C: 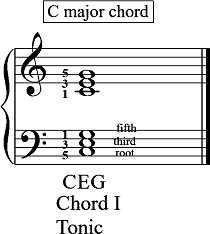 Here is the G major chord. It is built on the fifth note of the C major scale so it is chord V in C major. It is also known as the dominant: 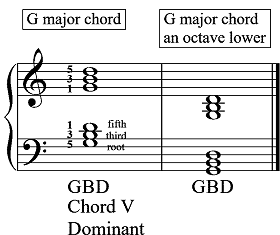 The tonic and dominant are the two most important and frequently used chords in any key.

It’s fun to learn chords by playing them in grand arpeggios as demonstrated on the video. You can string two or more chords together in a grand arpeggio progression, for example, C, G, C, or C, F, G, C.

Chords are often inverted for ease of movement from one chord to another. Chords in first inversion have the third, rather than the root, as the lowest note. 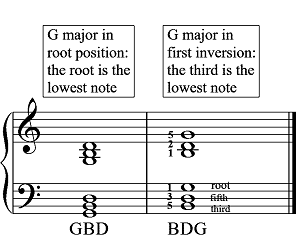 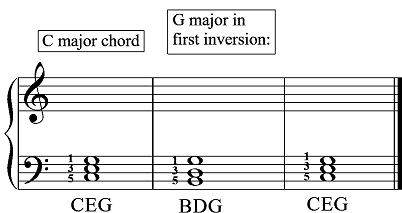 Now use these chords to harmonise Mary had a little lamb and One man went to mow - the tunes you heard in the video.

You can either first work out the chords while you sing or hum the tune, or you can work out the tune and then the chords. Both tunes begin on E, and are played in the C five-finger position, C D E F G (click here to view worksheets and downloadable scores).

When trying to find the right chord, listen carefully to decide whether it needs to change, and also, look: the chances are that the chord will include the melody note, but sometimes the melody note clashes with the chord (adding spice and tension), and then resolves down to a chord note on the following beat.

Adding a 7th to Chord V

Chord V often has a 7th added. Then it is known as the dominant 7th. 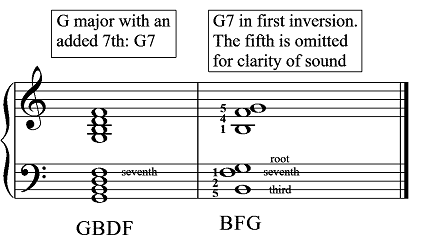 Practise the C, G7, C progression below until it feels comfortable, then try Mary had a little lamb and One man went to mow with G7 instead of C, and see which you prefer. 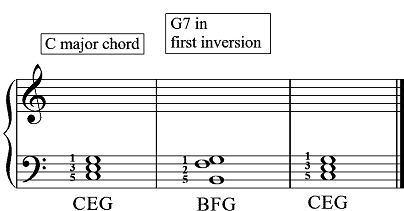 Oh when the Saints and Jingle Bells are also played in the C five-finger position, but they need a third chord, F, or Chord IV in C major. Chord IV is also known as the subdominant, not because it is one note below the dominant (although it is!) but because just as the dominant is five notes above the tonic, the subdominant is five notes below the tonic.

Practise the F chord in root position, FAC, and then play it as a grand arpeggio.

Here is the F chord in root position, first inversion and second inversion: 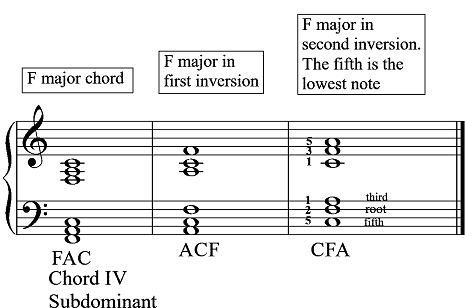 The three most important chords in any key are Chords I, IV and V, or C, F and G in C major.

Between them they include every note of the scale, so they are often the only chords needed when harmonising. They are known as the primary chords.

Here are the primary chords as they are usually shown in root position. Notice the chord symbol above the stave telling you the letter name of the chord.

Fig 2.10 - The primary chords in useful positions and inversions

Practise them, especially in your left hand, until they feel secure. Then try using them to harmonise Oh when the Saints (which begins on C) and Jingle Bells (which begins on E). You will find it easier to work out the chord progression first by trying out the chords while you sing or hum the tune. You will also find it helpful to write the chords down as you work them out. And, be careful, Jingle Bells includes many clashing harmonies -the melody note often clashes with the “right” chord before resolving to a harmony note on the following beat.

Accompanying singing – it's easier just to play the chords!

Practise the chords as written below, noticing that the chord roots are in the left hand, and that the right hand chords are in the usual piano-friendly positions for ease of movement and a good sound.

Now choose one of the songs which you have already harmonised and play the progression with these chords while you sing or hum the tune.

You can also play the chords in a rhythm to suit the style of the song. Here is an example of chords played in a catchy 4 time rhythm to accompany London Bridge is falling down. (It has the same chord progression as Mary had a little lamb).

Fig 2.12 - Chords in a catchy 4 time rhythm to accompany singing

Here is an example of a rousing waltz rhythm in 3 time to accompany Happy Birthday. 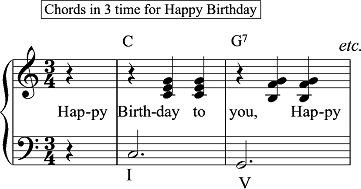 The complete chord progression for Happy Birthday in C major is:

Once you have learnt these chords thoroughly in C major, you will find them easy to transpose to other keys, for example, F or G major. And then you will also be able to create progressions and harmonise tunes which modulate (change key).

The primary chords in G major are G, C and D7, and the grand arpeggio progression played in the video included a two-chord progression in G major: D7 – G:

Dedicated to helping everyone play the music they love and long to play, Lucinda Mackworth-Young has pioneered Practical Psychology for Musicians to help teachers and performers teach, learn and perform as effectively and enjoyably as possible. She has also developed a step-by-step system for learning to play by ear and improvise, so that even classically trained piano players can play spontaneously, anywhere, anytime -and say “Yes!” when asked to play Happy Birthday!

Easy Improvising with the White-note Modes and Other Exotic Scales