The three books that make up The Virtuoso Pianist by Charles-Louis Hanon have been a mainstay with piano students since they were first published in 1872. It is interesting to note that Hanon had up until then been active as an organist and through his own publishing house had published various works, mostly method books. He was not known as a pianist. Because of its success in the Exposition Universelle (Paris’ third World’s Fair) in 1878, as well as through his acute business acumen, Hanon managed to get The Virtuoso Pianist accepted into various conservatories, and piano professors and their students quickly adopted it.

Because these pianists are eminently worthy of our respect, it would be colossally arrogant of me or anyone else to suggest they are wrong, misguided, or that they play the virtuoso repertoire despite their Hanon practice. Such virtuosos - highly intelligent people - clearly derive benefit from practising these exercises or they wouldn’t do them. And they clearly practise them in ways that are beneficial and not detrimental.

So what is the controversy surrounding these exercises?

Having said this, modern piano teaching has moved away from an insistence on mechanical exercises devoid of musical meaning, and away from the notion of isolating finger movements from the rest of the hand and the arm as Hanon’s exercises tend to do. By spending hours drilling the fingers in the way Hanon indicates, we not only risk wasting practice time that might better be spent on music but – worse - we may be ingraining muscular habits that could be detrimental.

So why bother with Hanon at all?

There are times when we might wish to explore specific technical issues away from the complexities of a real piece of music, or to develop basic coordination between the two hands. As a supplement to the piece of music requiring such skills it can be useful to turn to a contraption such as a five-finger pattern that is quick and easy to understand, and that can be done without reading from a score.

I do not practice Hanon, I never have. Nor do I assign it to my students because I feel the exercises are a waste of time if they are done in the way that Hanon suggests. I use Hanon exercises for the precise opposite of what they were intended for – when a student has been overdoing fingers, for example. Provided we remove Hanon’s instruction “lift the fingers high and with precision”, and dispense with the idea of doing all his repetitions, we can jailbreak Hanon and use the exercises for our own ends.

Let us remember one very important thing: by themselves the exercises are innocuous – it is what we do with them that matters!

As I have mentioned, Hanon’s exercises are nothing more than patterns of five-finger positions where a note is missed out on the way up or the way down in order that the exercises can move across the keyboard.

Jailbreaking is the process used to modify the operating system running on an iPhone to allow the user greater control over their device, including the ability to remove restrictions imposed by the manufacturer and install apps and other content through other unofficial online stores.

I have a variety of uses for some of the patterns found within The Virtuoso Pianist and will share these over a series of articles and lessons, starting with how you might use Exercise No. 1 to develop control of the wrist and No. 6 to develop forearm rotation.

Wrist Flexibility Exercise No. 1: Hanon No. 1 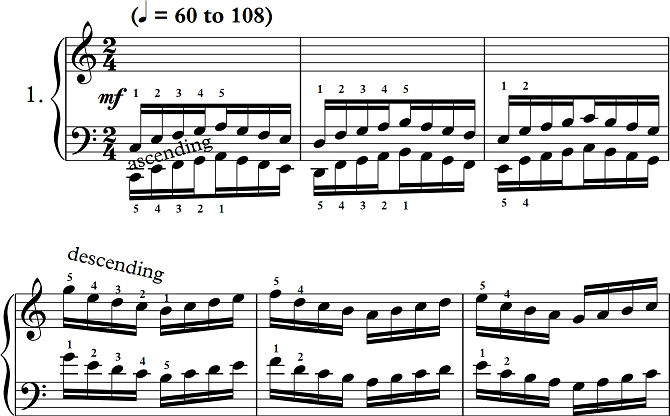 Quite contrary to Hanon’s instructions, in this jailbroken exercise the fingers do not operate as single digits but as extensions of the hand and arm.

Practise this exercise with each hand separately (instructions are given for the RH, but obviously apply to the LH as well). The tempo is very slow – crotchet = c. 50. One octave is more than sufficient, and if time is pressing don’t bother with the descending part of the pattern, or do the descending part with the other hand.

It is really important to keep mindful as you do this exercise, the mind focused on what you are commanding the arm and hand to do.

Wrist Flexibility Exercise No. 2: Hanon No. 1

Following on from Exercise 1, we now allow the next finger to sound by using the upstroke rather than wasting it. If the next finger is in contact with its key (and firm enough), the key will trip as the wrist rises up. Although the speed of the down/up motions is the same as in Exercise 1, we are in effect playing twice as fast because we are using the upstroke to produce tone. Again, there is no discernible movement from the finger itself.

Forearm Rotation Exercise No. 1: Hanon No. 6 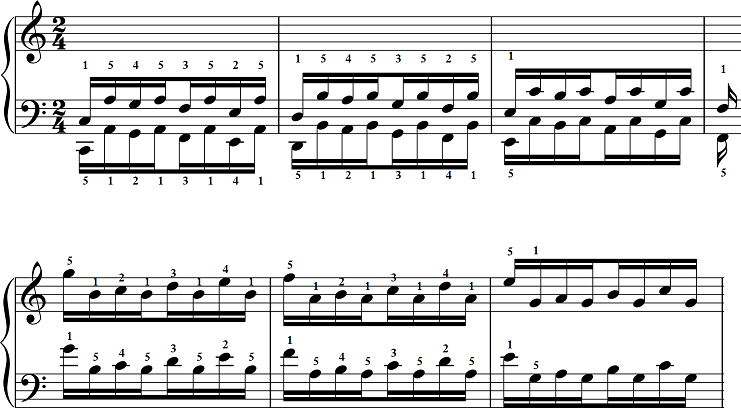 In this series of video lectures, I explore aspects of technique one by one. My approach is based on using the body in the most natural ways possible, with emphasis on healthy technique and correct alignment. While I recognise that exercises, such as Hanon, are out of favour with some... Read >>

This module follows on from the introductory module to explore the fundamentals of scale and arpeggio playing, featuring close-up video demonstrations of the movements involved. It provides suggestions and exercises for mastering technical challenges such as thumb passage and gaining speed, with further tips on how to structure scale and... Read >>

Some of the most difficult pieces in the piano literature involve double notes. This series explores how to develop the technical skills needed to play them at the advanced level. It provides detailed advice on how to practise scales, exercises and studies, along with some suggestions for studies you might... Read >>

Mastering core piano techniques is essential for the freedom to successfully express musical ideas. Based on her personal experience and the traditions of the Russian School, Ilga Pitkevica shares insights into approaches and strategies for achieving “pianistic fitness” and developing a balanced piano technique.... Read >>

A Practical Guide to Forearm Rotation

Forearm rotation is a way of coordinating the arm with the fingers in very specific and controlled ways. Tiny movements in the forearm share with the fingers the job of putting down the keys and can yield significant benefits, including improved coordination, reduced tension and a feeling of greater strength... Read >>

Pianists at the intermediate level should know all major and minor scales (one form of minor), and all major and minor arpeggios in root position. There are several scale manuals available, but this manual is different in that it offers exercises and suggestions for practice, together with short, easy-to-use video... Read >>

Piano playing is a deeply satisfying artistic activity, but it can also be very demanding physically on our arms and hands. Just as elite athletes understand and care for their bodies, so should pianists think carefully about their approach to playing and practising. A healthy piano technique not only avoids... Read >>

Scale playing is an area of piano study that is often neglected in lessons and undertaken only half-heartedly in practice sessions. And yet scales and arpeggios can be approached creatively, and practised in a variety of different ways! This series of resources on scales and arpeggios begins with the current... Read >>

The Exercises of Peter Feuchtwanger

Peter Feuchtwanger was an important teacher who created a series of exercises designed to encourage healthy, natural and relaxed movements at the piano. In this module, Graham Fitch and Daniel Grimwood give their takes on Peter's exercises and share anecdotes from their experience in working with him.... Read >>

Based on motions that are natural to the body, this introductory module explores the basics of piano technique, through a series of videos demonstrating how to move in ways that are natural the body to achieve physical freedom for playing that feels and sounds good. It serves as a starting... Read >>

The Art of Pedalling

This series of videos provides a comprehensive treatise on the subject of pedalling, starting with a brief history of the sustaining pedal and a video on finger pedalling. This is then followed by an indepth look at various aspects of pedal technique and types of pedalling, including: direct, legato, fractional... Read >>

This section provides an introduction to what will ultimately be an extensive library of technical exercises and provides an overview of exercise regimens for aspects of playing such as warm-ups, finger exercises, chord playing, octaves, double notes, repeated notes and trills.... Read >>

In this collection of videos, Penelope Roskell demonstrates clearly and concisely how yoga principles can be applied directly to instrumental playing, and how playing can be more fluid, powerful and emotionally expressive. Suitable for musicians of any age; from beginner to professional; Classical, jazz, folk and pop, the exercises demonstrated... Read >>

A thorough knowledge of scales and arpeggios is an absolute necessity for all serious students of the piano. Western music is built on the major/minor tonal system, and to attempt to study the instrument without scales (or basic theory) would be as nonsensical as learning language without the alphabet or... Read >>